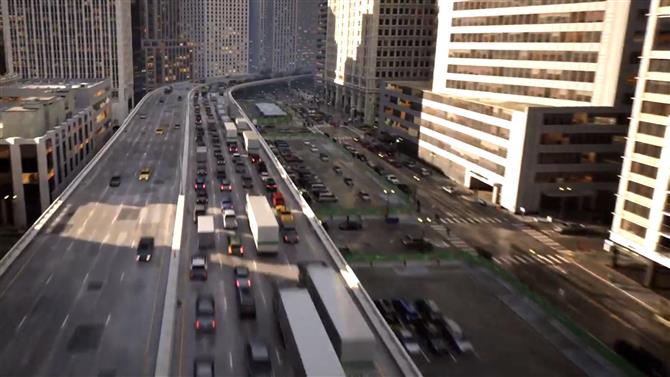 Players have been amazed by the near-photorealistic detail in The Matrix Awakens ever since it debuted last week, including GR’s own Josh West in his The Matrix Awakens hands-on impressions. While uncannily accurate recreations of Keanu Reeves and Carrie-Anne Moss in both their modern and 1999 forms are the start, the whole illusion of (un)reality would come cascading down if the world itself behaved in unrealistic ways.

This video from Reddit user elalextamez proves that – at least when it comes to commutes ballooning from 30 minutes to 3 hours – the simulation abides.

The video uses The Matrix Awakens’ flying camera to track across a traffic jam that stretches roughly 10 city blocks. When we finally get to the front, we see it all seems to have been caused by a very inconsiderately parked truck. In fact, the least realistic part of the whole thing is that the drivers haven’t started going around the truck in single file while wailing on their horns and making rude gestures at the driver, but at least the rest of the traffic backup looks remarkably accurate.

The Matrix Awakens is many things, including a new-gen exclusive tech demo for Unreal Engine 5 and a teaser for The Matrix Resurrections ahead of its arrival in theaters on December 22. However, it isn’t meant to be a full-fledged game of its own, or a sign of any such new The Matrix video game on the way. At least, not that anybody’s admitted to yet.

I got a BA in journalism from Central Michigan University – though the best education I received there was from CM Life, its student-run newspaper. Long before that, I started pursuing my degree in video games by bugging my older brother to let me play Zelda on the Super Nintendo. I’ve previously been a news intern for GameSpot, a news writer for CVG, and now I’m a staff writer here at GamesRadar.